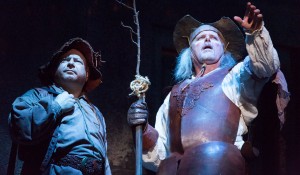 The exploits in Man of La Mancha are larger than life. To tell them, Bristol Riverside Theatre built a set that’s larger than the stage.

For the final production of its season, the Theatre went all out on a towering dungeon set: A multi-level expanse with a running fountain, a grate on the floor that pumps out steam, scattered doorways, starshines that illuminate the entire auditorium and steps leading to the front row of the audience.

Set designer Roman Tatarowicz’s creation is such an imposing presence that it earned the crowd’s first bout of explosive applause on opening night last Thursday, when a giant staircase descended from high above the crowd to reveal ominous, backlit figures.

With just the scenery getting that much attention, not to mention the standout musical numbers, play-within-a-play structure and legacy of the material itself, the actors risk getting lost in the mix. Fortunately, the cast is more than up to the task of standing out — even if it takes a little while for all the elements to settle in nicely.

Man of La Mancha dramatizes — and adds music to — portions of the classic 17th-century story of Don Quixote. They’re the misguided adventures of a man who, after reading book after book on chivalry, loses his sanity and sets out to restore justice to the world.

These episodes are presented as a manuscript written by the book’s author, Miguel de Cervantes, who, in the world of the production, is imprisoned and has recruited his fellow prisoners to act out the roles.

While now a classic, award-winning musical, it’s still a little confusing to follow, and the first act at the Riverside feels a little jumbled. The songs are beautifully rendered, and the individual scenes, particularly the iconic windmill battle, are wonderful. But there are moments where the transitions feel confused and the timing just a little off.

That’s all resolved, however, by the second act. And, with all the elements perfectly in

place, the production truly fires on all cylinders. Robert Newman’s transformations from playwright Cervantes to earnest, ragged Don Quixote with just the donning of a wig is fantastic. Danny Rutigliano’s wit and comedic timing as the squire Sancho is a perfect foil for Newman.

It’s also early in the second act that Tamra Hayden truly comes into her own, as Aldonza. Hayden makes her mark early as she spars with other prisoners, but soon blends back into the production’s rich tapestry.

Well before her standout performance in the song “Aldonza,” however, Hayden locks in with Newman and Rutigliano. The trio’s chemistry is almost palpable for the rest of the night.

It all fits, then, even the unsure footing early on. Just as the main character takes on more than one man could hope to accomplish, the Bristol Riverside Theatre created a production so big it risked collapsing on itself. Fortunately, the performances, and towering dungeon and looming staircase, all stood strong — and triumphed — in the end.

Man of La Mancha runs through June 5 at the Bristol Riverside Theatre, 120 Radcliffe St. in Bristol. For information, visit http://www.brtstage.org.

Error: Twitter did not respond. Please wait a few minutes and refresh this page.